Skip to content
Loading...
USNMix Report: WhatsApp is coming soon with new feature,
iPhone users will be able to watch Netflix videos in the app itself.
Whatsapp is coming soon with a new and great feature for iOS users. With this new feature, iPhone holders will be able to watch Netflix content like Facebook, Instagram and YouTube. Earlier, the instant messaging app rolled out Picture in Picture Mode. If sources are to be believed, WhatsApp will introduce this new feature by the end of the year. So let’s know about the new feature of WhatsApp.
Whatsapp’s new feature
According to the report, WhatsApp is working on the new feature. With this new feature, if any iPhone user sends a link to Netflix on WhatsApp, then they will be able to watch the video without opening the app. According to Beta Trekker, when users share the link of Netfilks on WhatsApp, they will be seen as big play icon. This icon will look like the sign on Facebook and YouTube. 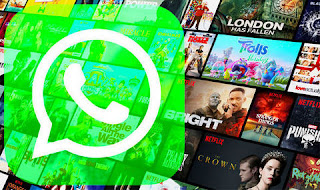 This is how the new feature will work
When users tap on the play icon, Netflix’s video will be played in WhatsApp itself. The instant messaging app has designed this feature only for Netflix. Right now this feature will be offered only for iOS users. Let us know that the instant messaging app WhatsApp will soon release this feature for Android users.
Let us know that WhatsApp has introduced these special features before the feature with Netflix, which includes Group Invitation, Multi Device Access and Forward Level Mode. Along with these features, the experience of the users has become even more spectacular.
Multi device access
According to the beta testing of WhatsApp, soon you will be able to use WhatsApp from the same number on two phones or two laptops. At the moment we can use WhatsApp from a number on a single device. At the same time, in order to use WhatsApp on the desktop version, the phone needs to be connected to the Internet, but this will not happen after the new update. After the new update, users will be able to use WhatsApp on different devices in exactly the same way as Facebook Messenger.
Group invitation
Till now, anyone used to add someone to any group of WhatsApp, but now if you make a settings, you will not be able to add to any group. For the settings, you will have to go to the privacy settings of the app and then select ‘Nobody’, ‘Everyone’ or ‘My Contacts’ from it.
Forward level
WhatsApp has started leveling the forwarded message, that is, an arrow will be seen in a message forwarding it repeatedly. Also it will be written forwarded frequently. This level will show that a message is being forwarded repeatedly.