Mar 16, 2020
Loading...
USNMix Report: Now Whatsapp will be able to run
from two different numbers on one phone, learn how.
By the way, WhatsApp can be run from a single number on a phone, but today we are going to tell you such a special trick, from which you can easily run a WhatsApp account on a mobile with two numbers. Also you will be able to chat through two numbers. So let’s know how you can run WhatsApp with two numbers on one smartphone …
Use dual app feature
In today’s time, every single smartphone is launched with the feature of dual sim. Through this feature, users can run two numbers on one phone. Talking about the messaging app WhatsApp, it is operated with a number. But, there are many such devices of Samsung and Huawei, which come with dual mode feature. Through this feature, users can run chatting with any contact with two different numbers. 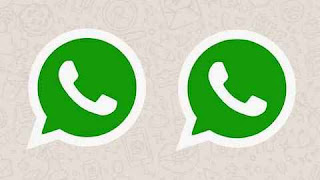 How to use dual app feature
To use the dual feature app, users should first go to the mobile settings and open the option with dual apps settings. After this you have to duplicate this feature WhatsApp. After selecting WhatsApp, go to the home screen of the phone and click on the other WhatsApp on the app launcher. Now users can chat with their contact with the second number in it.
Note: If this feature will be present in your phone, then only you will be able to run WhatsApp from two different numbers.
WhatsApp accounts can also be run from Google Play
Let us know that many mobile users create separate accounts for one service, so that they will be able to chat with two numbers at a time. In such a situation, there are many apps for WhatsApp on Google Play Store, through which two different accounts can be run. If you also want to run WhatsApp with two numbers, then you have to download Parallel Space, App Cloner, Multiple Accounts, Multi, Dual Space and Super Clone Pro App from Play Store.
Dark mode of whatsapp
Whatsapp launched Dark Mode for Android and iOS users a few days ago. Once this mode is activated, the eyes of the users are not stressed and this also reduces the consumption of the phone’s battery. However, so far only a few users have received the support of Dark Mode.