Skip to content
Loading...
USNMix Report: Windows 7 is shutting down,
your laptop will not work, know the answer to every question.
If you also have a laptop or computer that is working on Windows 7, then bad news for you, because the world’s most popular computer operating system Windows 7 is now shutting down. After 14 January 2020, Microsoft will not provide any update or support to Windows 7. Please tell that Windows 7 was launched in the year 2009. Along with the knowledge of shutting down Windows 7, the company is also giving notifications to upgrade its users. So let’s know how to upgrade to Windows 10 and answer all the questions related to the shutdown of Windows 7.
Will Windows 7 computers stop working after 14 January 2020?
No, it is not so at all. Even though the company is ceasing to support Windows 7, it does not mean that computers with Windows 7 will become useless after that. Windows 7 computers will continue to work, but after January 14, 2020, you will not receive any security updates. In such a situation, your computer or laptop will be targeted by hackers. There will be a risk of your personal information being stolen or hacked. After January 2020, Microsoft will not provide technical support to any computer working on Windows 7. 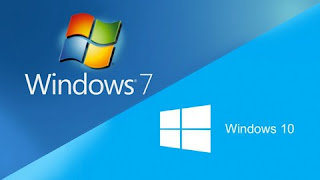 Over 80 million computers worldwide will have to be updated
The English website, The Verge, in a report in March this year, said that there are currently 80 million computers working with Windows 10 all over the world. In such a situation, all these people have to upgrade their computers. In such a situation, if you have Windows 7 in your system, then you have the option of upgrading now, then let us know how much storage your computer must have if you want to move from Windows 7 to Windows 10. Apart from this, which processor will be required for the upgrade of Windows 10.
Important specification of computer for Windows 10
To upgrade to Windows 10, the processor speed in your existing computer or laptop must be at least 1GHz. Apart from this, at least 2 GB RAM and 32 GB hard disk will be required. Apart from this, you will also need internet. Before upgrading from Windows 7 to Windows 10, the most important thing for you is to back up the files on your computer.
Who should choose Windows 8.1 or Windows 10?
Actually, going to Windows 10 will be a profitable deal, although you can also take Windows 8.1, but after January 10, 2023, Microsoft will also stop supporting Windows 8.1. In this case, you will have to update again. There are many versions of Windows 10 too, but if you use a computer or laptop for common use, then your work will also be done from Windows Home. If you need more, then you can also take Windows 10 Pro. There will be many features in it.
Will you be able to upgrade from Windows 7 to Windows 10 for free?
When Windows 10 was launched, at that time Microsoft had said that Windows 7 users can upgrade to Windows 10 for free, but this feature was only until July 29, 2016, as it was a promotional offer. In such a situation, now you have to pay to upgrade Windows 7. Windows 10 Home is priced at Rs 9,299.00. The validity of the license will be for one computer.

Fastag sale can now be introduced online through Amazon