Loading...
USNMix Report: Xiaomi launches Black Shark 2 gaming smartphone,
this will be the specialty.
This smartphone has a 6.39-inch AMOLED display, which has a resolution of 1080 × 2340 pixels. Qualcomm snapdragon 855 processor. Its battery is 4000mAh.
Seeing the increasing popularity of gaming, Xiaomi is going to launch a gaming smartphone Black Shark 2 in India. Black Shark 2 will be launched on May 27 in the Indian market. This phone will sell exclusively on Flipkart. In March, this smartphone was launched in the Chinese market. Gamepad 2.0 controller will also be launched in the program organized in Delhi on Monday. 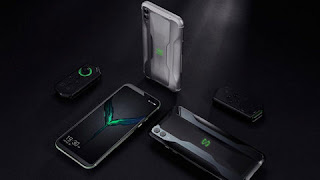 Features
The Snapdragon 855 processor has been used in Black Shark 2. Liquid Cool 3.0 technology has been used in this smartphone. Its RAM is 12 GB and internal memory is 256 GB. A wafer chamber cooling system has been installed in the phone for better gaming. No matter how much the phone will be hot using it. Some gaming features are also optional.
Other specifications
This smartphone has a 6.39-inch AMOLED display, which has a resolution of 1080 × 2340 pixels. Qualcomm snapdragon 855 processor. Its battery is 4000mAh. Selfie camera is 20 megapixels, with 48MP + 12MP dual rear camera. Explain, Samsung has designed its display, in which a process sensor system has been installed for the gaming facility. This will help the press during gaming.
At present, its price has not been disclosed. However, its initial price in China is close to 32300. The initial variant has 6 GB RAM and 128 GB of storage. The price of 12 GB RAM and 256 GB memory variant is 42400 rupees. The price of 8 GB RAM can be around 38300 rupees. It is expected that even in India, this smartphone will be priced at the same price. The starting price of this smartphone can be around 32000.