Dec 1, 2019
Loading...
USNMix Report: Xiaomi launches radio power bank,
will get special features.
Smartphone maker Xiaomi has launched Power Bank with FM radio at global level. Users will be able to listen to the songs while charging the phone with this device. Talking about the design, the company has given retro style to this power bank, which is very different from the previously introduced power bank. At the same time, it has been the first time that a company has introduced FM radio in Power Bank. So let’s know about the price and specification of FM radio power bank.
Power bank with xiaomi radio
Through this Power Bank, users will be able to listen to songs along with charging phones and other devices. Also, users will get two USB Type-A ports in this device. This Power Bank has a battery of 10,000 mAh. At the same time, the cost of the radio-powered Power Bank is 138 Chinese Yuan (about Rs 1,408). Let us tell you that the company had earlier launched a hand worm power bank at the global level. 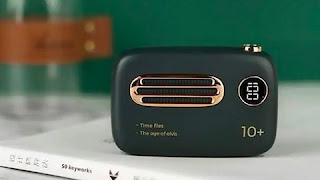