Xiaomi Mi A3 Smartphone launches on 21st August in India

Aug 21, 2019
USNMix Report: Xiaomi smartphone Mi A3 will be launched today,
know the features before launch!
Chinese smartphone maker Xiaomi is going to launch another cool smartphone Mi A3 in the Indian market on August 21. The company has already launched it in other countries. This phone will be a stock Android smartphone. Let us tell you, on behalf of Xiaomi, Stock Android is given in place of MIUI in Mi A series smartphones. It was first launched in Spain by the company.
New phone will come in two variants
Experts say that the new Mi A3 will be launched by Xiaomi in two variants. Its 4 GB RAM variant can have 64 GB of memory, while the 6 GB RAM variant is expected to have 128 GB of memory. A phone with 4 GB RAM is expected to be priced at Rs 14,999, while a 6 GB RAM smartphone can be found for Rs 16,999. After launching, you can buy this phone from Amazon. 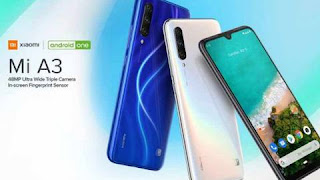 Listing on amazon India
Apart from this, the phone can also be purchased from Xiaomi offline and online stores. The company has listed the phone on Amazon India. According to the listing, it will be available in three color variants (More than White, Kind of Gray and Not Just Blue). Android 9 Pie will be given in this phone. It will have a 6.1-inch HD Plus screen. Under display fingerprint scanner will also be given in this smartphone.
For photography enthusiasts, the Mi A3 has a triple rear camera. One of these is 48 MP, the other 8 MP and the third is 2 MP. It has a single camera for selfie. In this way, a total of four cameras have been given in the phone. The Qualcomm Snapdragon 665 processor has been given in the smartphone.