Mar 4, 2019
Loading...
USNMix Report: Mi Smart TV launched in less than 13 thousand,
excellent features.
Chinese smartphone maker Xiaomi launched Smart TV in addition to launching two smartphones in the Indian market on Thursday. On behalf of the company it was told that Mi LED TV4 A Pro 32 inch has been launched. The company has fixed the price of smart TV at Rs. 12,999. This is the third MI TV to be launched this year by the company. Earlier in January, the company had launched the 55-inch Mi TV 4X Pro and 43-inch Mi TV 4 Pro.
Mi TV will be available from March 7
The 55-inch Mi TV4X Pro is priced at Rs 39,999, while the 43-inch Mi TV 4 Pro comes in 22,999 rupees. The launch of the newly launched 32-inch Mi LED TV 4A Pro will start from March 7 at 12 noon at Flipkart, MI.com and MI Home. The new Shaomi Mi LED TV 4A Pro has HD Ready display and has 20W speakers. 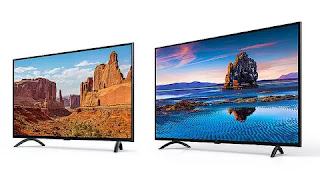 Smart TV costs Rs 12,999
MI LED TV4A Pro is similar to the pre-launch MI TV. It has patches and Android TV support. The new MI has more than 7 million content in TV. Apart from this, ChromeBook Inbuilt, U Tube Support and Google Assistant have also been given. The company’s 32-inch screen TV has a price of Rs 12,999. This TV will start on March 7 in the cell Flipkart. The TV is equipped with HD display and the latest Amelogic 64-bit processor.
Let you know Xiaomi Mi TV is popular among Indian customers due to its low price and best features. In the last year, the company had set a new record for Mi TV’s sales in Diwali, along with the International Data Corporation (IDC), in the third quarter of 2018, it has also been named as India’s Number one smart TV brand.