Loading...
USNMix Report: 4G variant of Redmi K30 will soon enter the market,
the company confirmed.
Chinese smartphone maker Xiaomi is about to launch the long-discussed Redmi K30 smartphone at the global level on the 10th of December. Also, the company has made it clear by releasing the teaser that this device will be launched in the market with dual 5G connectivity. Apart from this, 4G variants of Redmi 30 will also be introduced. The company’s Vice President Lu Weibing himself shared this information via a post.
Company’s president shared information through post
The company’s Vice President Lu Weibing wrote in the post that the 4G variant of Redmi’s 30 is about to knock in the market soon. Also, 4G variants of this phone will be offered at an affordable price. However, not much information has been received about the launch of the Redmi’s 30K 4G variant. On the other hand, if the media report is to be believed, the company will present this variant with the launch of 30 5G of Redmi. 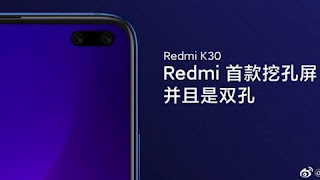 30 possible specifications of Redmi
According to the leaked report, the company will provide a fingerprint sensor on the side with a 6.6-inch HD display in 30 4G variants of Redmi. Also, users can get support of Qualcomm Snapdragon 730G chipset and 6GB RAM + 64GB internal storage in this phone. At the same time, if sources are to be believed, four cameras will be given in the 5G variant of this phone.
Expected Redmi 30 price
According to other leaked reports, the company will price the 4G variant of this phone at 1,999 Chinese yuan (about Rs 20,000). However, three cameras can be given in the back of this phone and two in the front. The original price and specification of Redmi 30 will be available only after the launching event.