Nov 26, 2019
Loading...
USNMix Report: Xiaomi Redmi K30 will be launched in December,
users will get support of 5G and fivehole display.
Chinese smartphone maker Xiaomi is going to launch Redmi K30 (Redmi K30) of the series on December 10 in China. Interestingly, the company itself has revealed the launch date of this 5G phone. Users will get support of dual punchhole and 5G connectivity in this phone. Also, many teasers of Redmi 30 were released earlier, in which some select features were reported. Earlier, the company had launched 20 series of Redmi in the market of many countries including India. According to the leaked report, the company will use the MediaTek chipset in this phone.
Redmi K30 will get dual 5G support
The 5G network is expanding in the US, Japan, UK and China. In such a situation, the company can offer 30 dual 5G modes of Redmi. In this, users will get Non-Standalone Access (NSA) and Standalone Access (SA) modes. At the same time, users will be able to take advantage of high speed data through these modes. Currently, only a select few telecom companies across the world are offering 5G connectivity. But official information has not been received about the launch of this phone in India. 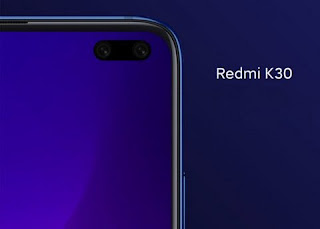 30 possible specifications of Redmi
According to the leaked report, the company will offer a dual punchhole display in the Redmi K30, like the GALECC S10 Plus, which will have a refresh rate of 12 GHz. Along with this, users can be given a fingerprint sensor on the side and a 60 megapixel lens of Sony. For better performance, Media Tech 5G chipset or Snapdragon 700 SoC can be given in this phone. But till now the company has not shared official information about the processor.
Redmi 30’s possible camera
According to media reports, the company will offer triple rear camera setup in Redmi K30, which will have a 60 megapixel sensor from Sony. Let us tell you that Xiaomi introduced the Mi Note 10 in recent times. Users were given 108 megapixels support in this phone.