Skip to content
Loading...
USNMix Report: Xiaomi will launch world’s first 108 MP Penta-Lens camera phone.
Chinese smartphone manufacturer Xiaomi launched the Note 8 series (Redmi Note 8) recently. Now the company is preparing to launch Mi Note 10. The pro version of this phone has been certified in Thailand recently. Now this smartphone is expected to be launched in markets outside China. The first teaser of this phone has been launched by Xiaomi.
First 108 MP Penta Camera
A teaser of the phone has been posted on the official Twitter account by the company. It is clear from this teaser that the company is going to launch Mi Note 10. It also shows that the world’s first 108 MP Penta camera setup will be given in the phone.
108 MP camera also in Mi CC9 Pro
Recently it was revealed that Penta camera setup will be given in Xiaomi’s Mi CC9 smartphone as well. The teaser of this phone was also shared by the company on its Weibo account recently. 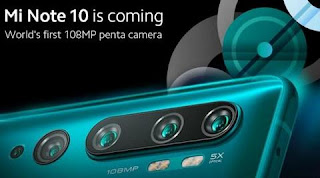 Mi CC9 Pro’s international variant
Looking at the features of both phones, it is being speculated that the Mi Note 10 phone can be the international variant of Mi CC9 Pro. However, it is also being said that there can be a difference of processor in both phones.
Mi CC9 Pro features
The 108-megapixel camera in Mi CC9 Pro is coming in Xiaomi’s Mi MIX Alpha smartphone. In addition to the 108-megapixel primary camera, it will have a 13-megapixel wide-angle lens and an 8-megapixel telephoto lens. According to media reports, the Xiaomi Mi CC9 Pro smartphone will be powered by a Qualcomm Snapdragon 730G processor. The same processor is given in Oppo Reno 2.